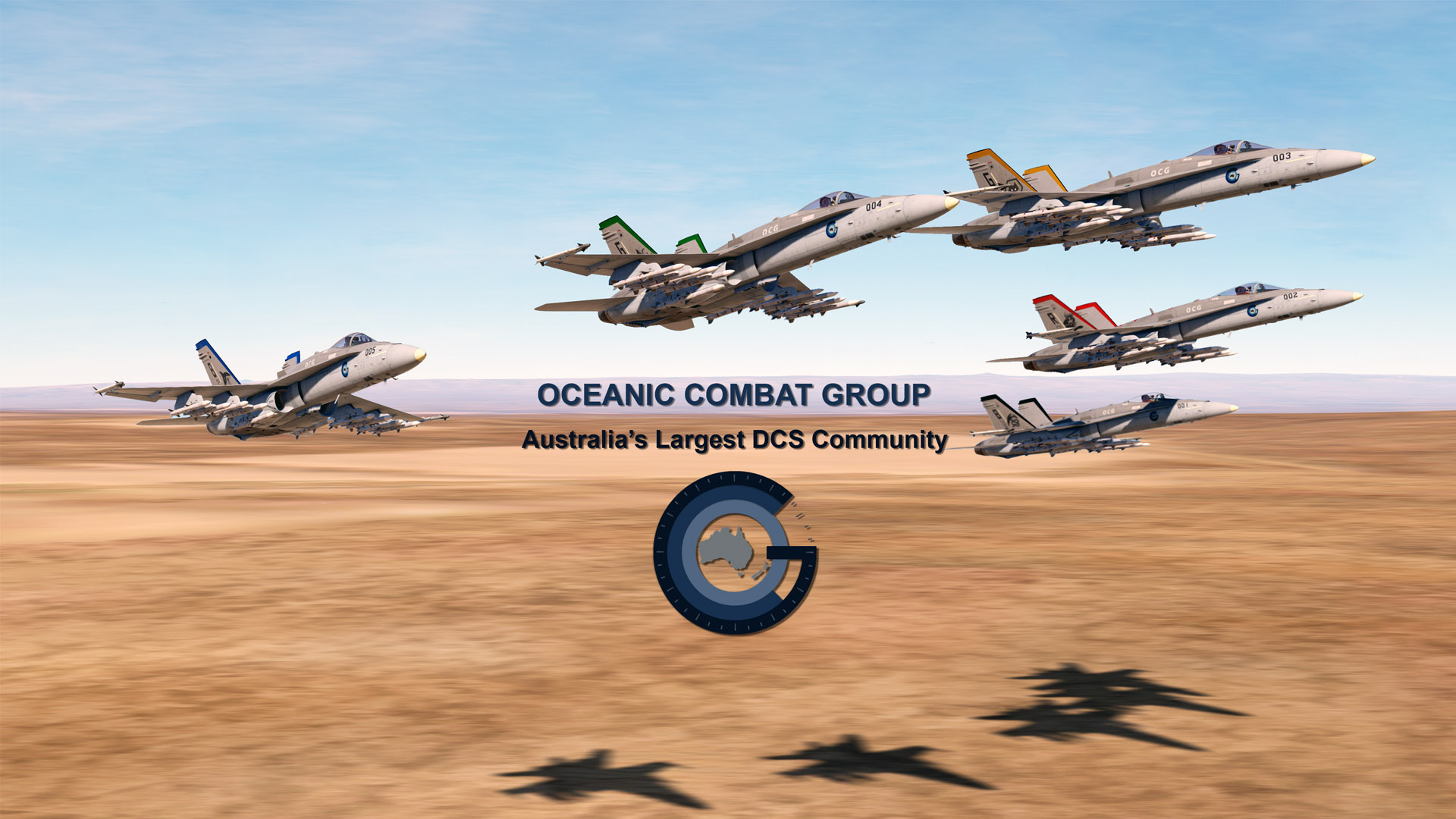 Welcome to the “Oceanic Combat Group” [OCG] a community that focuses on strong teamwork, in depth and quality training and providing a sense of realism within DCS.

Members are trained from basic formation flying and element integrity to advanced Air to Air/Air to Ground Employment, advanced brevity and a thorough understanding of how to operate as a team. OCG’s training as such focuses on employment and does not actively instruct on individual aircraft, instead opting that members learn on their own with the help of other members.

All training material is based off trusted anecdotal sources and a range of actual doctrine from Air Forces & Navy’s from around the world. Airframes commonly used include the F/A-18, F-16C, A-10C, F-14B, and F-15C.

Oceanic Combat Group, [OCG] initially was an active section of The Australia and New Zealand Tactical Community, or ATC which was an Arma Milsim community which was formed in mid 2015. During early 2017, ATC branched out into DCS with Hells starting the first server and running early iterations of “Through the Inferno” (TTI) by deadlyfishes who then formed the now 107th DCS community.

After the server began to gain a following ANZTAC adopted DCS as an officially supported title and started accepting DCS memberships. As membership grew, it was decided to focus fully on DCS and restructure. OCG now runs the only other officially sanctioned and constantly updated TTI missions for DCS and is consistently one of the most populated AU/Oceania servers.

What is Through The Inferno (TTI)?

Through the inferno (or TTI) is a series of Multiplayer PVE missions where you can fly any aircraft against automatically starting air to air and air to ground threats.

If you google TTI you can download the mission for all available maps and play your own offline version of it.

It is great for quick action and for practicing without having to fiddle around with the mission editor. The missions are separated in air to air, air to ground, but also heli missions.

Please note the rules listed here and are not limited to;

• You must always state your intentions in Discord, Chat and/or on SRS. Always check F10 map for friendly aircraft who are ignoring our comms. It takes two to wreck and that makes you partially at fault. There is a zero-tolerance policy for trolls or people interested in ruining the coop combat experience here.

• We have an auto kick/ban system in place for friendly fire incidents. Apologize in chat for any TK issues. Always check F10 map and IFF before firing. If you kill a friendly YOU are responsible for your actions.

• Everyone should at minimum have online chat open with the TAB key. SHIFT + TAB to type. SRS radio is highly encouraged. The rules are simple. If you are doing something that would harm another player’s ability to have fun you probably shouldn’t be doing it.

• General griping / trolling on our servers (discord and other methods of comms included) will not be tolerated. Admins and moderators will take any action that does not represent what an ‘ideal’ enlisted military fighter pilot would do as such as they see fit. Admins are always watching and easily reachable on Discord.

• Use of ordinance on friendly airfields is a bannable offense. There should be NO reason to fire any weapons on friendly airbases. It is understandable that incidents may happen during invasions, however those events only take place after the third hour of server uptime and they DO NOT spawn anywhere near friendly spawns or friendly AI units. Any intentional kills or damage done via use of weapons to friendly AI or players on friendly airbases is will result in a ban from our server. .

• Loading/arming and usage of nuclear weapons is strictly prohibited, especially when used on or near friendly airfields. This is a bannable offence.

• All moderators/admins have the discretion to deal with offenses listed or not as they see necessary. Do not park in the helicopter spawn area, as marked and noted in the briefing images. Feel free to use any other open area parking spots/ramps to park for rearm/refuel.

• This is a combat server. Please refrain from performing aerobatics near friendly airbases (within ~10nm), fly professional and state intentions in chat to notify other pilots. You will be kicked for reckless flying around other players.

• Offensive language, including but not limited to, profanities or a person’s sexual orientation will not be tolerated.

• Again, please respect our admins/moderators. We’re open to discuss any issues you may have regarding the community or the in-game server, but we will not tolerate any disrespect towards the admins, moderators or our community members. If you do not fully understand any of the rules listed above or need more clarification please do not hesitate to get in touch with us via discord or by our forum (oceaniccombatgroup.com.au).

• Banned: If you are autokicked or banned by an Admin. Put your case forward via Discord/Forum NOT in Chat. Upon joining any over our comms (Discord, SRS, etc…) or game servers on DCS World, means you agree to adhere to our rules listed above, else administrative actions will be enforced against you.

APPLICATIONS ARE NOW CLOSED – REOPENING IN 2022

Before putting in an application, fly with us for a bit. Get a feel for the way we do things. Join our Discord channel and/or SRS and say hi.

Next, decide if we’re the right group for you by giving a read about who we are above.

Then, complete the application-to-join form and be in discord for a staff member to be able to contact you.

Please Help Us Keep Our Servers Up By
Donating with PayPal